With A Little Bit Of (Geographic) Luck

It’s just the way luck works.  Sometimes little, and seemingly irrelevant things, can have a big impact.  Take geography.  South Carolina and North Carolina, for example, although adjacent states, evolved into two totally different places culturally because of an accident of geography.  I never thought about this before I read it in the excellent guidebook “Managing the Waterway” we’re using. South Carolina got all the good harbors, North Carolina got three dangerous Capes – Hatteras, Lookout, and Fear -- and shifting shoals.  It was so dangerous that the coastline of North Carolina is nicknamed the “Graveyard of the Atlantic.” (We’re glad that nowadays, with the building of the ICW, we have a safer inland alternative instead of going around these!)

Here’s how the book explains it: “It’s not just that South Carolina is warmer than North Carolina; the culture is different. South Carolina is the Deep South: palm trees, southern cooking, and plantation architecture.  South Carolina’s harbors, much more hospitable than North Carolina’s, led to the development of a wealthy plantation society with booming aristocratic cities like Charleston, Beaufort, and Georgetown.   This economic head start and cosmopolitan culture still influence South Carolina’s coast.” [p SC-67]  By contrast, “With its dangerous inlets, shoals, and capes, North Carolina developed very differently than its neighboring coastal states.  Virginia and South Carolina, with their large protected harbors and easy ocean access, dominated maritime commerce.  … Bustling ports, merchant wealth, and cosmopolitan cities developed on South Carolina and Virginia’s harbors.  But North Carolina largely missed out on the boom.  You won’t find large commercial and naval ports like Norfolk, nor cosmopolitan cities like Charleston.  In North Carolina, the towns along the ICW are smaller maritime communities…” [p. NC-39]  Oh, yeah, one other thing North Carolina got instead of deep harbors good for commerce?  Pirates.  Those treacherous shifting North Carolina shoals were great opportunities for high seas raiders to plunder and then get away where it was too shallow for naval vessels to follow them.  The wreck of the famous pirate Blackbeard’s ship was recently found near Beaufort, North Carolina; we saw an exhibit of the first artifacts recovered from the wreck at the North Carolina maritime museum while we were in town. 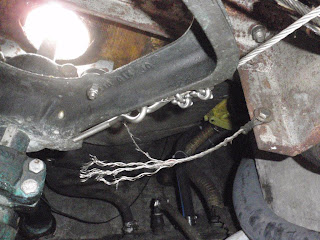 We mused about how “geographic luck” colored our experiences over the winter in St Augustine as well.  Had we picked any other marina than the municipal downtown location we did, we would have been in a more suburban strip-mall setting instead of walking distance to the old downtown.  Those spontaneous evening strolls are what stand out in my memory and make us want to return someday.  I probably wouldn’t have been so charmed by the town and its rich history if we hadn’t been right in the midst of the action.
And speaking of luck in a more prosaic sense, look what the mechanic found on our boat yesterday!  Can’t say enough good things about the expertise, or the hospitality, here at Deaton’sYacht Service. Why does the discovery of a broken rudder stop cable have us doing a happy dance?  Well, because it was found at the dock, instead of failing catastrophically at sea.