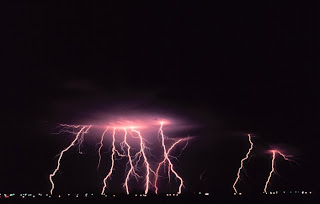 The only good thing that can be said about sleeping in clothing is that it makes for a very fast start to the next day.  And after the night of a million mosquitoes, an early departure was exactly what we had in mind.  Another long day and we’d be across the Albemarle Sound, a body of water famed, like the Chesapeake, for its short choppy nasty waves in bad weather – and bad weather was predicted to arrive late that afternoon.  We hoped to be well across before then.

The winds started to pick up around noon as we reached the mouth of the Alligator River where it empties into the Albemarle and I started to have my doubts, but the weather turned out to be absolutely benign for the crossing.  In fact, I decided that the Albemarle was a rather pretty body of water, blue and sparkling in settled weather.  Then just as we got to the other side and dropped the sail, the winds pick up and the sky began to take on more threatening colors.  But we were across – and it would just get more and more sheltered from here.

We were still about an hour from our next available anchorage and the winds continued to build and the sky to roil in ominous shades of blue-gray-black.  Weather radar showed huge blobs of reds and oranges (the colors that indicate very strong storms) coming towards us, and the Coast Guard announced increasingly frantic special marine warnings about the storm.  Clarification: the Coast Guard themselves are never frantic, they are the ultimate professionals, they just relayed NOAAs increasingly frantic text warnings that “mariners should seek safe harbor immediately…” (yep, we’re doing that, okay) “winds in excess of 34 knots…” (i.e., gale-force winds from unpredictable directions, good thing we’ve already got the sails down) and “frequent cloud-to-ground lightning” (uh, huh.  We live at the base of a 50-foot lightning rod also known as a sailboat mast.)  The race was on.  It was dark as twilight and the chill wind was pushing us sideways – the sail cover alone was acting like a small sail.  We pushed the engine to the max (thank you Gary at Deaton’s Yacht Service for the excellent tune-up you just gave it last week!) and anxiously watched the sky.  When we heard the first rumbles of thunder and saw the first flashes of lightning, we contemplated the minimally sketchy shelter in front of us.  Should we drop anchor here, where we’d be uncomfortable but probably okay, or do we think the storm will wait just a bit? In another 20 minutes or so we can get to the better spot just a mile ahead? (Note to self: this is where the expression “any port in a storm” literally comes from.)

We decided to press on while the storm loomed ever closer.  We got to the spot we had picked out on the chart … and it didn’t look like we remembered!  But it still looked pretty secure – any port in a storm indeed – and we were HERE and so was the storm.  We set the anchor faster than we ever had, and let out extra scope so it could hold us even more securely in a blow.  I couldn’t help but remember that two years ago we were just a few miles from this spot when we were hit by the downdraft, and was scared of a repeat.  I pulled up weather radar again – there was that line of reds and oranges marching westward toward us – and we went below to finish our storm preparations and wait.  In addition to the extra anchor scope, we left the engine idling and put our cellphones in the oven.  (Huh? What’s THAT all about? Should we be struck by lightning, it would of course scramble all the electronics; the theory I hope never to have to test is that the metal box of the oven would act as a kind of Faraday cage, dissipating the charge and protecting the phones so we could call for help.  We also have a handheld GPS, handheld VHF radio, and backup hard drive similarly protected.)  We sat, away from the mast and other metal, and waited.

It wasn’t long at all before the first rain drops fell. Then … nothing.  Just a light, gentle spring rain.  It was as if we were shielded by some magic cone of protection.  The barometer was rising again.  How could the storm possibly have missed us?  I took a chance on the weather radar – all the storms had dissipated when they reached the western shore of the river, and we were anchored just off the EASTERN shore no more than a half-mile away.  Just like that – gone!  Whew!  And, wow!

Sometime after dinner, it hit us.  Too much adrenaline during the afternoon, and too little sleep the night before, and we were done.  Cooler than last night, and the wind is certainly blowing the bugs away.  We were in bed by 8:30, planning on staying put the next day while the storm blew itself out.
Posted by Dan N Jaye at 5:34 AM