Overnight Up the Chesapeake 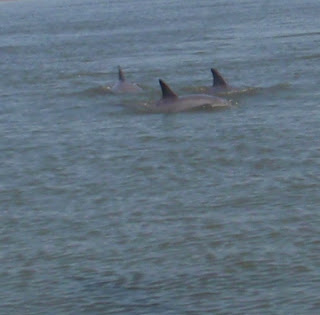 We stayed in near Norfolk for several days, recovering from the night of a million mosquitoes and the thunderstorm that didn’t happen.  When we got underway again, we would be only about 4 travel days from home.

So, we’re motoring up the Elizabeth River near Norfolk, VA, and I can only describe what happened as “flash-mobbed by dolphins.”   We’re churning along this very developed industrial stretch when Dan called out, “Dolphin!  There! Port bow!”  Cool, I love seeing those guys.  “There!  Again!”  And then, “Another one, over there, by that building!”  and, with increasing excitement, “There, too! Alongside us!”  Suddenly we were surrounded by about a dozen dolphins, leaping and splashing and playing in the sunshine.  They weren’t hunting, or running, just the sheer pleasure of exercising muscles in a way that I don’t remember doing since I wrote my age with more than one digit, and seemingly inviting us to join (or just watch in awe).  They did their magic for a few minutes, then, just as quickly as they had come, with a flick of a tail, they were all gone, again, all disappearing at once.  Surreal.  And *this* is why we put up with the inconveniences to live on a boat.

While the dolphin display was certainly the coolest thing to happen to us in a long time, it wasn’t the only happy thing that happened that day, because that evening we set the anchor behind Old Point Comfort – we were back in the Chesapeake.

Next day began a beautiful sail with fair winds and an assist from the current, sending us northward at times at speeds as high as 8 knots over the bottom (in still air and flat water, we motor at 6 knots, so this was a 30% boost!)  Our plan was to play with names a bit: there are many “Mill Creeks” in the Chesapeake and we were going to anchor in a different one each night: the “Mill Creek” near Old Point Comfort, then next night the “Mill Creek” off the Great Wicomico River, then next night the “Mill Creek” near Solomon’s Island.  But the weather was so glorious, and we were moving so well, that on the spur of the moment, we decided to sail through the night and reach Annapolis next morning.

While the decision was impulsive, it wasn’t frivolous; predicted bad weather later in the week could have left us holed up in port somewhere waiting for several days.  So it made sense to take advantage of the good weather now. While he was working with the OSTS sailing program at the Naval Academy, Dan had sailed the length of the Chesapeake Bay on overnight trips with a crew of midshipmen more times than he could count.  While it’s never wise to be complacent about the ocean, his experience did help with our confidence. We were both familiar with the Bay, with our boat, and with overnight sailing together.  And of course, we had everything we needed (a.k.a., almost everything we owned) right here with us – the benefit of living full-time on our boat.  As the sun went down, I rifled through the food lockers for easy sugary snacks to give us an energy boost, pre-made a few sandwiches, gathered flashlights and life jackets and tethers.

There was one place where our spontaneity could have tripped us up – the “float plan.”  For safety’s sake, it would be nice to have someone on shore know what we were planning and when we were expected in, so they could alert the Coast Guard to start a search if we didn’t arrive.  And of course we hadn’t preplanned that, so no one knew what we were planning. My Life Afloat on Facebook page to the rescue!  I’m lovin’ this new iPhone technology – for the trip up the Bay, we had 100 friends keeping us company, as we posted updates and a few photos from various spots along the way.  Having several friends to chat made the long night watches pass, if not more quickly, at least more cheerfully.

The night was relatively peaceful and uneventful.  We shared the dark Bay with several tugs and barges and even a small cruise ship, and watched a rusty red half-moon rise at about 2 AM.  The fair current was actually too much of a good thing – by about 4 AM we reached Thomas Point light just outside Annapolis harbor.  We had made the trip in record time … but didn’t dare come in until daylight so we could see and avoid the crab pots that always line the shallows.  We had slowed down for our last hour of travel, but we weren’t slow enough, we were still too early.  We “hove to” (a method of “parking” the boat when you are in a place where it’s too deep to anchor) and waited for what seemed like ages – Annapolis was so close, and we were sooo ready to sleep, but we didn’t dare risk catching a crab pot in our propeller.  At about 5:30, the sky went from black, to dark gray, to lighter gray, and began to lift with shades of orange and blue, and we finally completed the very last bit of our 7-1/2 month journey.  Home again!

= = = =
Shameless self-promotion - my blog for the Annapolis Capital newspaper is moving to a new location: Life Afloat but there are still some glitches to be worked out. Until then, I'm posting at: Life Afloat Archives
and like Life Afloat on Facebook!