We'd wanted to visit James and Ellen in California but just couldn't find tickets at a rational price. I was bemoaning this to some online girlfriends including one named RoseAnn when - synchronicity is wonderful - up pops a sidebar advertising low airline fares! So we jumped on them, and - extra special super duper synchronicity - had to change planes in Denver, where the RoseAnn lives. And, since we had a 2-hour layover in the middle of a Saturday afternoon, she was going to be able to come out to the airport to meet us. This trip was coming together nicely!
Coming into Denver I was hit by homesickness and realized not the New York I was born in, but Colorado is home, where I met Dan and came of age - my thoughts were of the mountains and plains and sunshine - and wondered if we could buy some land near Erie (Colorado) and dig a giant lake and fill it and move Cinderella there? That way I could have both my life afloat and my Rocky Mountain high? Sunshine and open space, I never got used to how little public land there is in the East.
When we came into the airport, fortunately we were in the closest terminal and could just walk over the pedestrian bridge to the terminal - as we were walking down the hall Dan asked if I knew what RoseAnn looked like, and just then I spotted her waiting at the edge of the security barrier, and I pointed and I said, "Like that." and we hugged. We've been friends for about 12 years and never met in "real life." We found a bar and had a beer and we tried to talk extra fast because we'd only have an hour before we had to run to catch our next plane. We changed topics frequently and erratically and tried to cover everything; it was an exhilarating feeling. It was lucky there was no line in security because we pushed it down to the wire - the plane had already boarded. We walked onto the plane like rock stars, no wait. I've always wondered why the folks in first class think of it as a privilege to get to board the plane first. You're going to be in those seats for enough time just flying. To me, the privilege is to wait till the last minute enjoying the freedom of walking around in the terminal.
James and Ellen met us after we got off the plane in San Diego. They told us that while they were waiting for our flight, they'd gone to the beach to watch a classic wooden boat race. They took us to the beach (5 minutes from the airport!) and a few boats were still sailing around, very lovely. Then jet lag began to take its toll and they drove us up into the mountains to their house. (More photos of the house are in this post.) We drank too much rum and caught up on everything since we'd last been together, almost a year to the day ago, when we went our separate ways after reaching Allen's Cay in the Bahamas. Next morning after coffee, we headed out to explore the nearby desert.
Finally meeting RoseAnn: 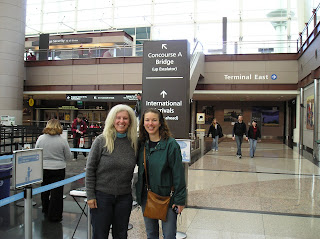 Sunset over the Pacific Ocean, view on the road just below James and Ellen's house: 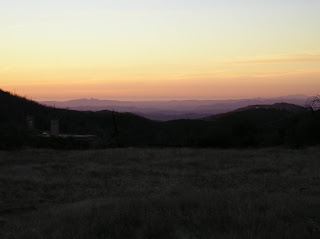 Snuggled in the trees, this is the view that greeted us next morning out the guest bathroom window: 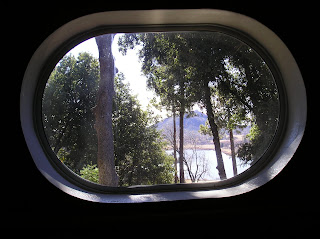