Never Turn Down an Opportunity to Play

Okay, so we thought we were just going to visit the Bounty, docked at City Dock, for an hour or so.  Nothing too strenuous as Dan was still pretty fragile after surgery.  And because we wanted to get some photos, we went in garb.  So the adventure began.

First, on our way toward the ship, we met friend Cindy with her kids, and a couple of her friends with their kids, sitting under a tree.  They had just come back from visiting the ship, and we chatted a bit.  And posed for photos.  Which (as it always does) led to some other folks asking for photos.  And then we got a bit closer to the ship, and got stopped again, this time by a group of parents with a group of girls, who asked questions (Why are your shoes made out of rope? How big is the ship?)  And - of course - posed for photos.

So next thing we knew, someone in a logo t-shirt from the Bounty was by my elbow, and the first thing I thought was that we were horning in on their show, or being "impostors" of City tour guides - are we in trouble?  Quite the opposite!  Seems they were short-handed, and needed someone to do the "get your photo taken with a pirate" gig, fundraising to help the ship's educational mission.  We're there!

We had an absolute blast, marred by only 2 things.  We just didn't know enough about the ship to answer questions, and of course, Dan was still tiring easily.  After 3 delightful hours we promised to be back on Sunday; and when our Saturday previous engagement canceled, decided to come back Saturday as well.  A bit of internet research helped us learn a bit more about the ship, so we feel better on that front.  Free, fun, and for a good cause ... can't beat it! 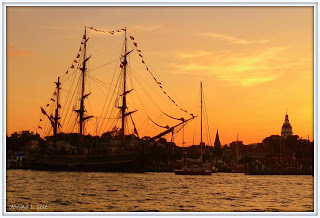 [photo of Bounty at sunset by Donna Cole]
Posted by Dan N Jaye at 4:33 AM