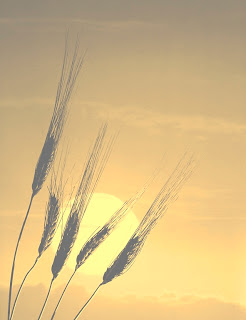 
I’ll leave the actual “how he got hooked on sailing” for another post, but here’s a thought. There’s a surprisingly similar mindset necessary for success and happiness on the farm or at sea. Sailing the ocean’s blue waves, and growing the amber waves of grain, both remind you of how small a single human is, set against the scale and power of nature. You must always be aware of the weather; its moods dictate what you can do on any day. The same calm patience that turns potential boredom into a meditative state applies whether riding a tractor back and forth plowing every inch of a field, or sailing at 5 knots toward a distant blue horizon. Being at sea far from help when something breaks means that your tool kit requires more than a cellphone and a checkbook; you need self-reliance, creative problem solving to jury-rig a fix far from a parts store. It’s the same way, on the farm. From Dan’s father’s house, you could not see another building except as a smudge on the horizon, so if a tractor broke in the middle of the field, you had a looooong walk if you couldn’t fix it yourself. Most of all, both life on the wheat fields and life at sea encourage independence and a love of solitude and wide horizons.

There, you see? Farm boy to sailor is not such a leap of faith after all!