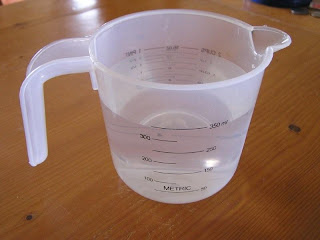 People in the Caribbean take a pretty casual attitude toward a lot of things.
(1) This measuring cup cracked me up. If you look carefully, you will notice that the metric side doesn’t line up with the English side: you don’t need to be a rocket scientist to remember that 250 ml is approximately one cup, and 500 ml is approximately one pint. But on this cup, 250 ml lines up with 1-2/3 cups, and 350 ml lines up with one pint. The first morning we made oatmeal, this cup certainly made for a texture the Quaker Oats people never intended! Wishful thinking? But mostly I think this measuring cup should be paired with the Piet Hein grook: “Some people live in a dream of what’ll allow them to live their dream – they solemnly hold out a half-pint bottle and ask for a pint of cream.” (We later calibrated it with a bottle of water labeled 8-oz that was handed out at the parade; the metric side was closer to being correct. No problem, mon!)
(2) So, the map we got from the tourism folks was pretty skimpy. We asked for, and got, a bigger map. It was about twice the size. Opened it up … it was the same map, just printed bigger. No additional detail, which of course was what we were after. Must be an island thing.
Posted by Dan N Jaye at 3:12 PM