Denny at the helm (unlike the rest of us, he's drinking tonic water, not wine): 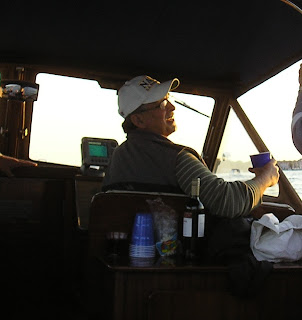 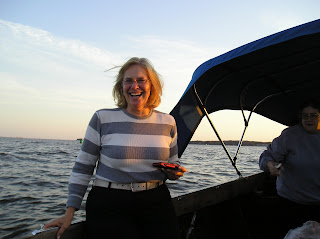 While sitting in the cockpit with Melissa last weekend, watching the "parade" of boats running up and down Back Creek, Dan spotted some familiar faces in an unfamiliar boat. Our former dockmates and sailors Denny & Paula, on a classic wooden picnic boat named Infallible. We called to them, tried to get them on VHF with no response, but they circled back and idled and we had a hurried conversation - they had been bequeathed the boat by her father, it was a 50-year-old wooden Lyman, the name came because they were the race committee boat, and would we like to go for a sunset cruise with them next week? Duh!
So yesterday, armed with bottles of wine and snacks, we stepped aboard the oldest boat we've ever gone for a cruise on. I stared over Denny's shoulder at the classic analog dial instruments for rpm and temperature (wish I'd gotten a photo of that) and we motored around the harbor, under the bridge, and up Spa Creek. On the way back, Denny held us out in the entrance to the creek to capture the sunset. Minutes later, as we were motoring in, he turned out again to catch the moonrise.
Sunset over Annapolis, and simultaneously, 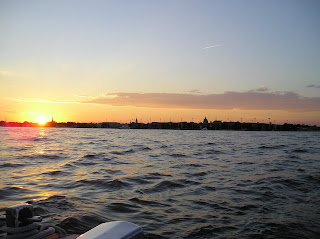 Moonrise over the Bay Bridge 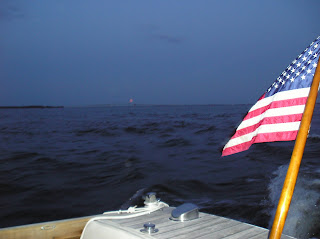