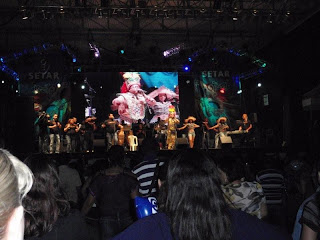 We went to a “tumba” festival/concert/contest, a total of 11 bands competing in a judged contest. Going to a this kind of event in Aruba quite different than going to a concert in the U.S., starting with the venue. The Entertainment Center is not quite like anything else we’ve seen. We got tickets but there weren’t assigned seats – there weren’t even seats. People brought their own plastic chairs or folding chairs, or stood. The Center is like a large walled parking lot, open to the sky, with a stage at one end. And people don’t sit in place and pay attention to the performance in quite the way they do in the U.S. They stroll about and connect with friends, or buy beer or snacks from the booths that line the perimeter of the Center. Tumba is Caribbean music with an African origin and a high-energy 6/8 beat that had me tapping my feet, drumming on my car door with the memory of the rhythm all the way home. The songs themselves were all in Papiamento and nearly incomprehensible to us, but the music was magnetic and the numbers included sight gags ranging from 2x4s and wheelbarrows, to a baseball team, a caricature of a tourist with sunglasses, cigar, and dragged carryon bag, dancers, and one all-girl band dressed in red satin. Typically Arubian, the schedule was on island time. The start time printed on the tickets was “7:00 P.M.” which meant that the first band began to set up at about 8:15. We wandered out at around 12:30, after all the bands had presented but before the judging.
Posted by Dan N Jaye at 9:17 AM